The former football player, manager and current TV pundit and anti-racism activist will be in conversation with GMB Scotland Secretary Gary Smith about his life story and his personal experiences of discrimination both on and off the park, offering practical solutions for the way ahead in tackling hate in all its forms.

The event, which kicks-off from 7PM at the Scottish Trade Union Congress (STUC) Building on Woodlands Road, Glasgow, is free to attend for all and will also include short films by United Glasgow FC and SRtRC. Leroy will also sign copies of his book at end of the event, which will be available to purchase on the evening.

GMB Scotland Secretary Gary Smith said: “It will be a real privilege to have Leroy with us and to hear his life story, which in itself is captivating, and his experiences of suffering and challenging discrimination as professional footballer and activist.

It will also serve as a stark reminder, if one was ever needed, that we cannot be complacent about the discrimination that persists across Scottish society today, including in our ‘beautiful game’.

Through the work of Show Racism the Red Card we know that there has been an alarming rise in the levels of race hate crimes reported across Scotland in the last year and we only needed to tune in to the most recent Old Firm game to see sickening acts of racist abuse.

Scotland isn’t different to anywhere else across the UK and we still have so much work to do.”

SRtRC Chief Executive Ged Grebby added: “We are proud to be working in partnership with GMB Scotland on a number of anti-racism projects in Scotland and this another important part of our campaigning agenda.

Leroy, who has been a pioneer in engaging young people on this front through their sporting role models, is the Vice President of SRtRC and will be speaking about his involvement with us as part of the book launch.

What Leroy has demonstrated throughout his time at SRtRC is that education is the most powerful tool possible to carry forward the fight against discrimination in all its forms.” 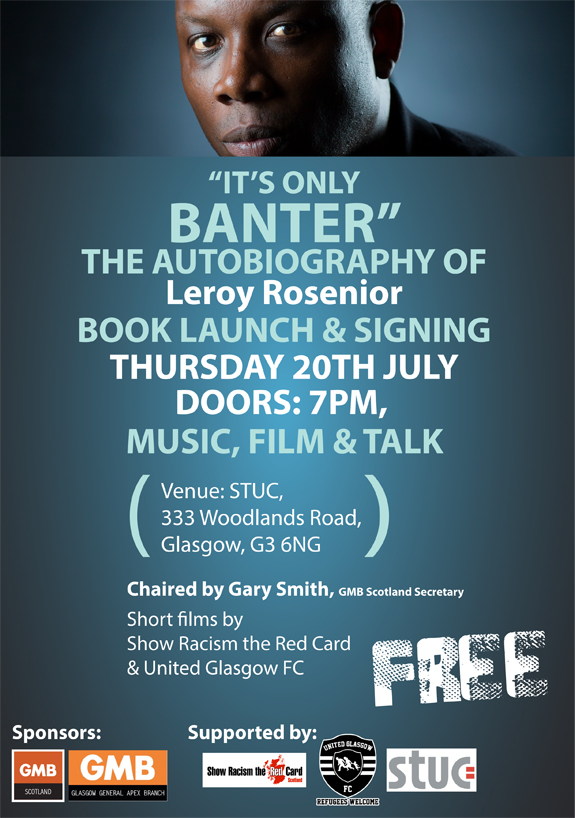