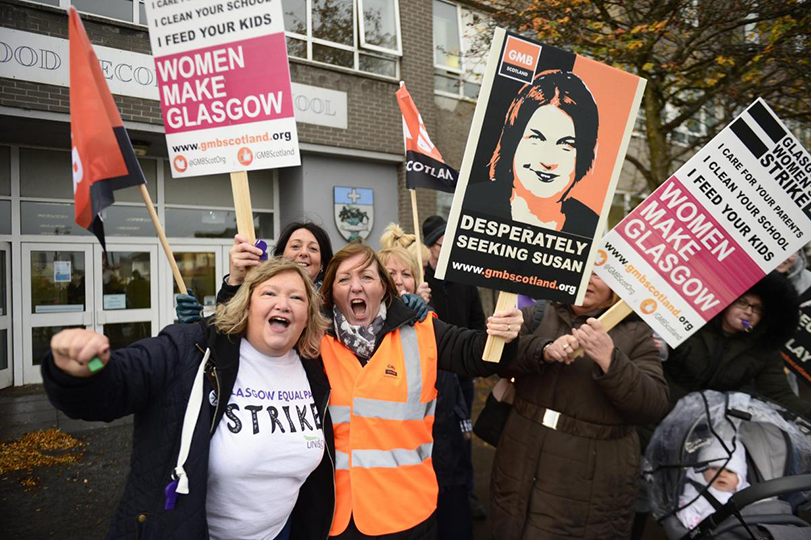 The theme of International Women’s Day 2021 is #ChoosetoChallenge, and at GMB Scotland we are focussing on our choice to challenge to pay discrimination.

I am regularly discouraged when I listen to the conversation on economic justice for women which is too often focussed only on the Gender Pay Gap (GPG). Whether that is of the country or individual companies, the analysis often stops at a shrinking percentage and a call for more women in senior roles.

It's true that more women around the boardroom table would help to close the GPG but what it won’t do, most likely, is change anything for the women at the very bottom of the pay scales. Society’s focus on the GPG is erasing the experience of women on the shop floor, dealing with chronic low pay, short hour contracts, multiple contracts and split shifts, unequal access to pension schemes and so much more.

One of the very real impacts of all eyes being on the GPG, is that employers are hiding behind this to cover up their poor pay and conditions for women workers.

In my role, I read a lot of Equality Impact Assessments. Often done by private companies, commissioned by other companies or local authorities. And for the most part, they are terrible. The standard formula is to get a gender breakdown of grades, do some very shallow analysis and pivot to talk about how the gender pay gap is shrinking. There is never any real analysis of potential equal pay issues or the impact of low pay on women’s lives. They are then rolled out by employers as giving them carte blanche to implement whatever harmful policy they were trying to push forward.

I have seen Equality Impact Assessments and the GPG used to justify cutting over time rates, take away bonuses afforded mainly to low paid women, and even to cut wages for those on the lowest pay grades.

There is no shortcut to delivering pay justice for working women. It will happen through women on the shopfloor getting organised via their union and fighting for pay equality and pay justice. Trade unions must be ready to take on this fight, even when it means challenging well established pay structures that benefit members in male dominated jobs.

It is never easy to shake up the status quo, especially when it means challenging some very strongly held biases around the value of women’s work. When push comes to shove, do we really think care is of equal value to and deserving of equal pay to construction? Well, all the evidence suggests that it absolutely is and that many ‘skilled professions’ that are put on a pedestal have female dominated jobs of equal value being artificially held down by sexist assumptions, sexist pay and grading structures and sexist employers.

It isn’t enough to see value in the work done primarily by women, we need to fight for that value to be reflected in pay, terms and conditions and how work is organised.

One thing we can all do on International Women’s Day is make the commitment that we will #ChoosetoChallenge pay inequality. No longer accept the Equality Impact Assessment that props up the employers. No longer ignore discriminatory pay, and no longer allow bias, gender pay gaps or old-fashioned sexism to give us any excuses not to take on the fight for pay justice.